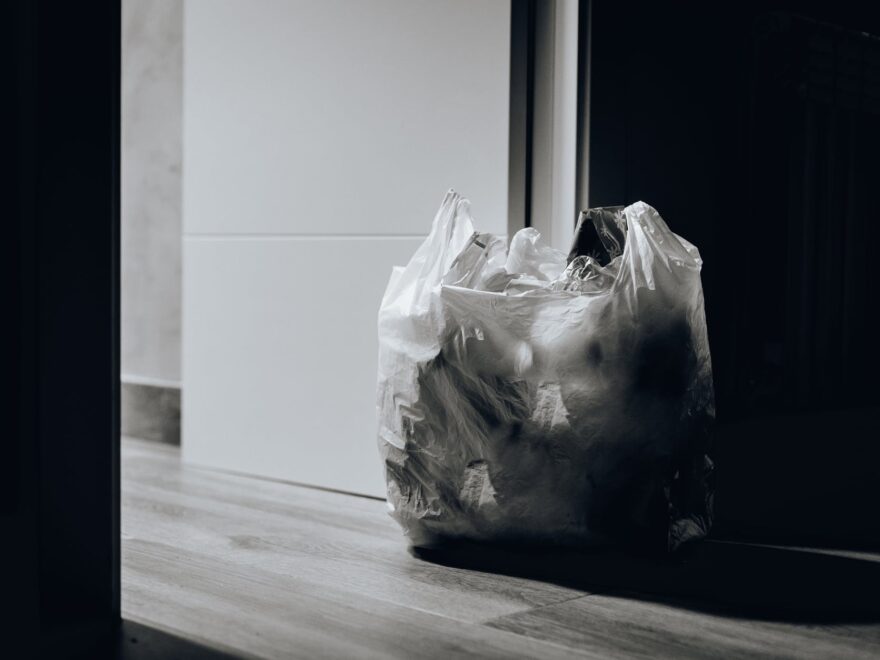 I told you recently that I don’t recycle much because neither curbside recycling nor easily accessible drop-off recycling exists in my area. Since I’m an otherwise responsible person, you might think I’d prefer to recycle more. But that isn’t true. I’d rather not generate much that needs to be thrown away.

I’m calling this my… wait for it… Grocery Bag Garbage Goal.

Eventually, I would like our household of two to be so simple, responsible and efficient that we don’t generate much garbage at all. In fact, I think a very reasonable goal is less than one plastic grocery shopping bag of trash a week. I have to include the word “eventually” because three things are standing in the way of that now, but they can all be overcome.

First, I’m still getting some postal mail. I’ve eliminated most of that by opting out of pre-approved credit card offers and asking each catalog company to remove me from their mailing list. It takes time for everything to stop coming, but I did most of that several years ago. Only a few companies still send me junk mail, and that’s because I haven’t been vigilant in making them stop. I also get a few bills by mail, but I pay all of them online. Those will be easily eliminated with a bit more vigilance too.

Second, I still use too much convenience food. I’m responsible for the cooking in our household, but I’m also responsible for running the one-person business that supports my household. We eat more meals out than I’d like to admit (although those happen when we’re out anyway — we rarely go out just to eat), but we also use lots of packaged meals, like skillet dinners and microwavable entrees. These usually have a box, a tray, a film covering and often a sauce packet or topping. My kitchen trash bin can be empty one minute and half full of packaging the next. Better eating habits will help this.

Third, my ongoing decluttering efforts sometimes generate a lot of trash, but that’s only temporary, I hope. I’m sure I’ll be finding ways to further unclutter my life for decades, but the big push to eliminate the clutter in my life won’t last forever… although so far it has.

My GBGG (as I suppose I could call it) could become a reality, but so far it hasn’t – and I first wrote about this topic many years ago. I’d like to cancel my weekly curbside trash pickup (a $28 per month expense), but it’s coming in very handy at the moment. My eventual and hypothetical small bag of trash could be dropped off in a public trash can while I’m putting gas in the car, placed in a trash barrel in a park where I’m taking a walk (where household trash isn’t prohibited) or put in a bin almost anywhere I am. Of course, that’s placing the burden of my trash on someone else, but it’s still more responsible than generating 96 gallons of trash — the capacity of our current and often full poly cart. I could even get permission to include it with a neighbor’s trash.

And what about that smelly, rotting-food garbage? I have a better idea for dealing with it that I’ll discuss with you another time.